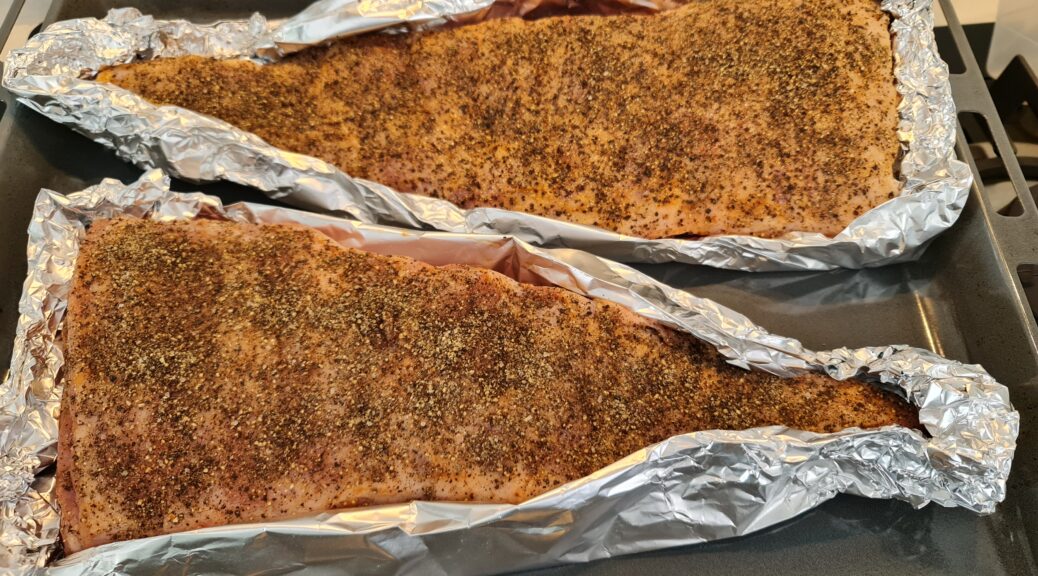 I believe this slow-cooked BBQ pork ribs is my first recipe post. Don’t worry though as it likely won’t become a regular thing it’s just that this recipe has been asked for AND the dish received the seal of approval from my mother in law!

The style is inspired by Aaron Franklin’s MasterClass but there are limitations here in Singapore – no fancy smoker barbeque will fit in my HDB apartment!

1 – Buy a rack of pork ribs. Ask the butcher for the ones (cut) that will go well in the oven.

2 – Spend time cleaning the cut up. For me, there’s always plenty of little bits of bone, particularly along the edges where the butcher has sliced through the bone. Give the meat a nice pat dry once you are done.

3 – Make the seasoning. It’s super simple at one part salt to two parts ground pepper. How much are you going to need? Quite a bit! Check out the photo below for the result after seasoning to give you a guide. Now might be a nice time to pre-heat the oven to 120-130 degrees Celsius for fan-forced. (250-260 Fahrenheit.)

4 – Season the meat. I start by laying out enough foil that I create some nice walls to what will eventually be the covering. The edges are thick because they are the most likely to get poked by the rib bones as they protrude further out after a bit of cooking. After that, I add a small amount of BBQ sauce to cover the meat that will give it a sheen. Then generously season both sides with salt and pepper. The BBQ sauce will help the seasoning stick. Season both sides and then have the meat side facing up. Check my photo for how mine looks after seasoning.

5 – As suggested above you can then wrap the foil around the meat. See the photo.

7 – Pull the meat out of the oven. Add more BBQ sauce but a more liberally this time. I’m lazy and only add to the side facing up with the meat.

8 – Tighten up the foil wrapping and then add more foil to fully wrap the meat and get a tight seal.

9 – Add the meat back to the oven. You can really let it stay in there as long as you like. The longer it’s in and the more likely it will fall off the bone when you are trying to slice the ribs. I’ve generally been leaving it around three (3) hours.

10 – It probably smells great and you can eat it now or…. You can open it up, add more BBQ sauce, turn the oven up to 200 and get the ribs back in there for more stickiness. Thirty (30) minutes should be enough cooking time for you.

11 – You are done! Slice then up being careful as the meat will be falling off the bone and you’ll need to be careful to cut between the bones. Approaching it from both ends as the angles can be different.

Enjoy and let me know how it turns out for you!