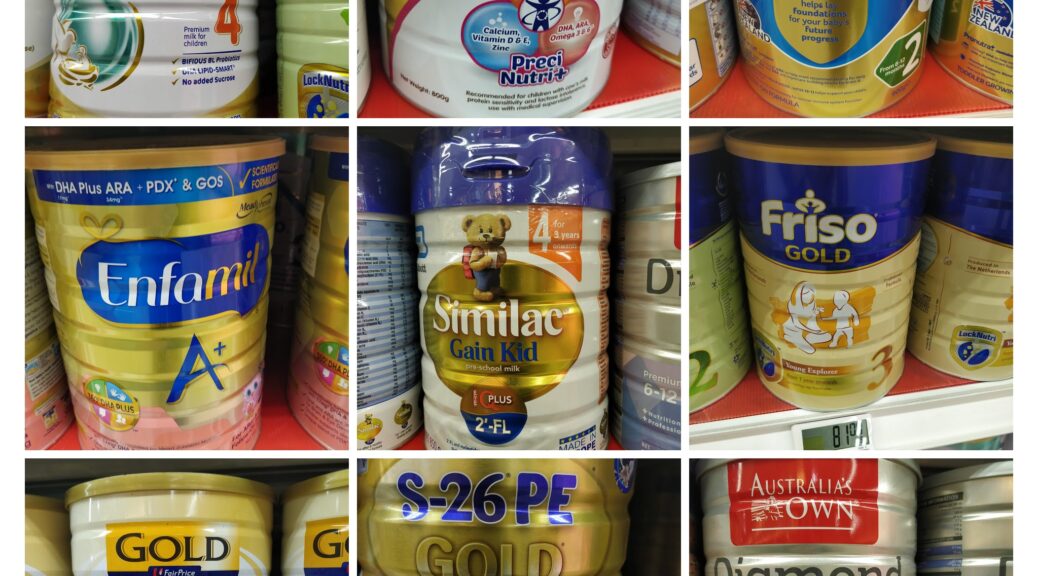 One of the aims of the World Health Authority was that no baby should be worse off and therefore all infant milk products should have the best nutritional ingredients. This should certainly be a challenge for companies but the R&D team is here to come to the rescue.

As a reminder of Part 1 – Analysis of a Singapore supermarket shelf covered the fact that companies are not meant to market towards children under 12 months and in many markets even older. How do they get around this? Marketing to every adjacent category possible and in this case letting it be known that the nutritional ingredients used are state of the art.

The most frequent packaging claims are around the ingredients found in the product. Let’s do a quick run down.

Docosahexaenoic Acid is an omega 3 fatty acid which you can easily get from fish oil but is also a component of breast milk. In the body it’s often found in the brain and retina and therefore companies link it to the development of both. Eicosapentaenoic Acid (EPA) is a longer version that requires more breaking down. The evidence is slim but may help prevent heart disease. Arachidonic acid (AA, sometimes ARA) is a polyunsaturated omega 6 fatty acid and may be linked to muscle development and neurological healthy. Some say that as additives there’s no proven benefits and they are leading to adverse effects.

Companies Claiming: Everyone except Friesland and Australia’s Own.

2′-Fucosyllactose is an oligosaccharide, more precisely, fucosylated, neutral trisaccharide composed of L-fucose, D-galactose, and D-glucose units. The claim is that it’s the most common human milk oligosaccharide and protects against infectious diseases.

Companies Claiming: Abbott is owning the SEO optimisation in Singapore with the biggest add (of two) and the top four (1)(2)(3)(4) pages before the Wikipedia article. This article from The Straits Times on 3 things you need to know about 2’-FL, the newest ingredient in baby formula milk was posted as news branded content which seems like a sure fire way to make sure readers don’t trust you as a news source. The article has a link to 2fl.sg which actually links to abbottfamily.com.sg/2-fl and I feel tilts the article in to being misleading.

According to Wikipedia Sphingomyelin is a type of sphingolipid found in animal cell membranes, especially in the membranous myelin sheath that surrounds some nerve cellaxons.

Nestle Wyeth claim myelination is associated with learning and cognitive performance. They are pretty careful with their wording and it’s only a “may” though. If you just read the website your child’s memory, intelligence and language skills will all benefit.

The research is patented and long story short it should help stop diarrhoea which can be dangerous in children.

In a similar category to lcFOS is Oligofructose often referred to as FOS. It’s used as an artificial sweetener but also to help as a prebiotic.

I was surprised how few companies made claims in this area. The claimed ingredients were vitamins C, D, and E and minerals Calcium, Iron and Zinc.

This was an interesting claim from Abbott. According to their Similac 2′-FL website “The naturally occurring α-tocopherol stereoisomer RRR-α-tocopherol is predominant in the human infant brain.”

This was further linked to vitamin E but there was no strong link that Natural RRR was added to the product.

If anyone has further information that natural RRR is added to the Abbott products then please leave me a note in the comments.

What would we do without Wikipedia “is a xanthophyll and one of 600 known naturally occurring carotenoids. Lutein is synthesized only by plants and like other xanthophylls is found in high quantities in green leafy vegetables such as spinach, kale and yellow carrots.”

It may be beneficial to eye health among other things but the evidence is inconclusive.

From Mead-Johnson’s explainer on prebiotics: “A prebiotic is a nondigestible food ingredient that brings about specific changes in the composition and/or activity of the gastrointestinal microbiota which confer benefits upon host well-being and health.”

Some companies are calling out specific prebiotics while others just using the general term.

So what’s the difference: “The prebiotic approach aims to increase resident bacteria that are considered to be beneficial for human health, e.g. bifidobacteria and lactobacilli, while probiotics advocates the use of the live micro-organisms themselves in the diet. Both approaches have found their way into infant formula feeds and aim to more closely simulate the gut microbiota composition seen during breast-feeding.”

From the Mead Johnson education centre: “PDX stands for Polydextrose, a dietary fiber that feeds beneficial bacteria throughout the large intestine. It supports the balance of the gut system by stimulating growth and activity of beneficial bacteria (gut flora), which benefits your child’s immune system. PDX and GOS (Galactooligosaccharide) work together to foster the growth of good bacteria and promote digestive health. The unique blend of PDX and GOS promotes frequent and softer stools in children, and thus may help reduce the risk of occasional constipation.” A number of references are included from the website for the claims above.

GOS benefits the bowel function by stimulating the growth and activity of the beneficial bacteria in the colon. It can help to increase defecation frequency and hence it can help to prevent constipation in the children and infants.”

From WikiPedia “is a water-soluble vitamin-like essential nutrient. It is a constituent of lecithin, which is present in many plants and animal organs.”

Other sources say that our body can make Choline in small amounts in the liver but it’s easier to get from food.

From WebMD: “Beta glucans are sugars that are found in the cell walls of bacteria, fungi, yeasts, algae, lichens, and plants, such as oats and barley. They are sometimes used as medicine.

Beta glucans are used for high cholesterol, diabetes, cancer, and HIV/AIDS. Beta glucans are also used to boost the immune system in people whose body defenses have been weakened.”

From PubMed: “Although dietary nucleotides have been suggested to have beneficial gastrointestinal and immunological effects, nucleotide-supplemented formula feeding has not been shown to confer the same benefits as breast feeding, and randomised controlled trials have yet to prove that healthy term infants fed nucleotide-supplemented formulas compared to those fed nonsupplemented formulas, have accelerated physical growth and neurological development, better growth and development of their gastrointestinal tract resulting in improved digestive and absorptive functions, enhanced development of their immune system resulting in increased resistance to infection and lower bacterial and viral infection rates during infancy, and a more favourable intestinal microflora associated with a lower rate of infectious diarrhoea. “

According to Wikipedia: “Soy protein isolate is a highly refined or purified form of soy protein with a minimum protein content of 90% on a moisture-free basis. It is made from defatted soy flour which has had most of the nonprotein components, fats and carbohydrates removed. Because of this, it has a neutral flavor and will cause less flatulence than soy flours”

It’s used for children who cannot tolerate dairy products. Most companies have specific products for lactose intolerance that weren’t on this main shelf so it may not be an isolated case for other products.

From WebMD: “Taurine is an amino sulfonic acid, but it is often referred to as an amino acid, a chemical that is a required building block of protein. Taurine is found in large amounts in the brain, retina, heart, and blood cells called platelets. The best food sources are meat and fish.

Milk Fat Globule Membrane is something that I expected to see on the packaging from Reckitt Benckiser-Mead Johnson but that wasn’t found.

Below is my collated list of nutritional ingredients based on what was on the front of the pack. I didn’t look at the back packaging because in my opinion it’s not something that marketing is using to drive sales.

Nutritional Ingredients Listed As Not Being Included

Less analysis of this table but there were a small number of products that were listed as not being included in products.

Surcose is an interesting one for health reasons as there’s modern push against added sugars. Palm oil is likely for environmental reasons. Cow Milk Protein and Lactose are for lactose intolerance.

For quantity the Danone Dumex lines had 15 different ingredients (beyond the milk!) while Friesland has none!

There was also a clear difference with the big brands trying to differentiate with ingredients with Danone Dumex and Nestle S-26 having 3 unique nutritional ingredients, Reckit Benckiser-Mead Johnson having 2 and Abbott one but also trying to own the 2’FL product marketing.

Next up we look at the pure marketing terms and key messages used on the packing including so so so much gold.

For other articles in this series see: